Hubby took me, as a side trip, to a place he found interesting for what it once had been. However, I was fascinated with the present and future that I found at my feet as I stepped out of the car. Literally at my feet—and under my feet—was a myriad of dry elm fruits, one of several kinds of winged seeds, samara, that capture my fancy. (OK, maybe I could actually count them but it would have been a difficult process. While now we most often use it to mean innumerable or an innumerable quantity of something, did you know that historically, the word myriad meant ten thousand?) I wish I had had a camera at the ready so I could have taken a photo of the bounty and the trees. I had not seen the seeds before and first and foremost, they reminded me of God’s creativity. As I walked along a path littered with hundreds, if not thousands—maybe a myriad or more—of these fruits, I thought of the intricacies of nature, the abundance, the smartness.

I have said seed sometimes but really each samara is a winged achene, a dry fruit containing a single seed. (Another type of achene is the sunflower fruit. You crack the 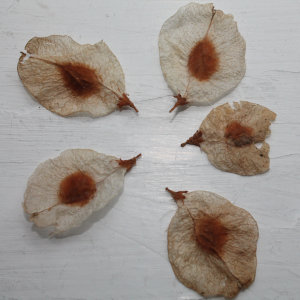 dried fruit to get to the yummy seed inside but we typically and incorrectly call them both seeds.) Achenes are indehiscent which means that they don’t crack open at maturity. Instead, new life begins with the seed sprouting inside its casing and then breaking free from it as it grows. From this point on, I will try to use the proper words.

Anemochory, seed dispersal by wind, is used by many plants and trees. (One unusual example is the tumbleweed!) A samara is designed so it can fly far from the parent. In some species, like the elm, the seed is found in the middle of the wing and it flutters or glides to the ground. I wanted to have a clip showing the “spring snow,” as the falling of the fruits from the trees is sometimes called, but did not find one with the appropriate copyright. However the following video gives us an idea of both the number of samaras that can be produced and how easily air can lift them, each necessary for maximizing the likelihood of the fruits landing in a place favorable for new life. 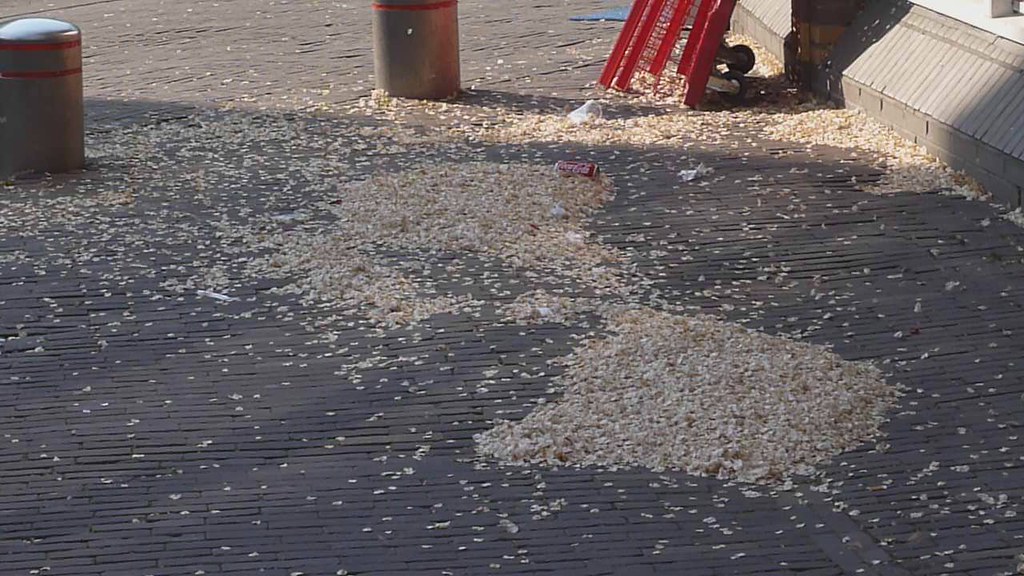 Other samaras, like the “helicopter seeds” of the maple, have the seed at one end with the wing extending out towards the other and they rotate, twirling downward. It was these I thought of when I first examined the elm fruits. Have you ever thrown one up in the air to watch it spin down? It seemed magical when I was a child and still does. Fun, 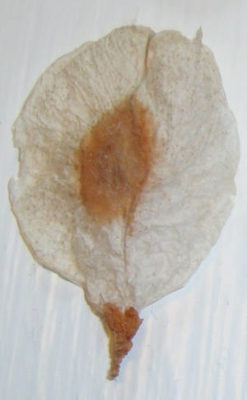 too! It’s a familiar illustration of physics—in particular mechanics, the branch of physics that describes motion, forces and energy. The Big Bang Theory before quantum mechanics if you will. We can see how its swirling and hovering behavior is an excellent way for it to stay airborne, helpful for more successful propagation. Newton’s first law of motion is the one I am most familiar with:  a body at rest tends to stay at rest; but samaras help illustrate the second part of that law:  a body in motion tends to stay in motion. While it usually takes more than a gust of wind to get me moving, these winged achenes are urged on by that added force, sailing ever farther.

In looking up information about the elm, I discovered that not only do some people eat the small, young leaves but also the whole fruits, apparently when they are a fresh green—straight from the tree, in salads, fried in butter, as well as in leaf sauces and pot herbs. They contain protein and supposedly have a slight nutty taste. I say supposedly because I haven’t tasted them myself; but now I plan to check them out next year and will let you know what I think. Samaras are still edible after they have dried (like the ones in these photos). Just remove the papery wings and eat the seeds raw or cooked. (It is probably best not to stuff handfuls of untried edibles, especially raw foods, into the mouth, but to first test and make sure they do not cause an allergic reaction. It’s also good to remember that different types of elms may give different results.) I had two samaras left so removed the wings and tried them. The seeds were small and didn’t have much taste. Maybe they were a bit too dry? Or perhaps a whole lot more are needed? Anyway, they didn’t taste bad plus I didn’t have an allergic reaction so I definitely plan on trying them again.

The inner bark of the elm, along with that of pine, beech, linden and others, has also been used as a source of sustenance during famines at least all the way back to Viking times, as a complement to or replacement of local grains. The worse you had it, the more bark you blended together with what meal you had. It is said to be a great source of antioxidants and now a luxury item, purportedly served at the 2011 Nobel prize after-party. I cannot say if elm was included in that bark bread or not.

Fruits, seeds, leaves, bark— they call to mind the Grape-Nuts commercials from my childhood:

“Ever eat a pine tree? Many parts are edible.” 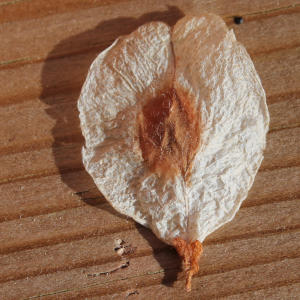 Some may have laughed at Euell Gibbons but he was correct, and it’s not just pine. While I am not one to freely eat from the trees as I take my frequent walks, I do recognize that there is a bounty to be found in nature. Berries, mushrooms, and yes, even trees, offer much if we only know what to take.

As said, I plan on visiting those woods again in early spring so I can see the elm fruits while still on the trees. I hear they make the trees look like they have leafed out. Hopefully I will also get a taste. I’ll keep you posted.

What is your favorite samara? Do you have any memories of playing with them? I’d love to hear from you!